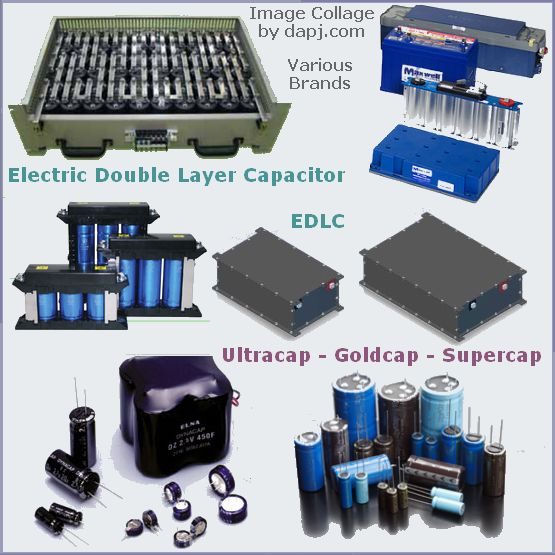 The Electric double layer capacitor has the main use of a Charge Reservoir. That means a large amount of electrical charge in a small footprint.

These charge/discharge quickly unlike the battery, There is no Electrical Energy to Chemical Energy Transformation and back, like in batteries. It may need caution in design and usage as they may carry a lot of punch.

In Product Safety terms; The Battery has a Internal Resistance, but a Supercap does not. When used in Values like 100F and is fully charged, an Internal or External Breakdown of Insulation or Short Circuit may Occur. The Heat Generated is Enormous. Murphy’s Law says such things happen..

DLCAP – Electric Double Layer Capacitor – Nippon – They have a range of Supercapacitors upto 2500F at 2.5V and Modules like 400F and 15V. There are two types Prismatic and Cylindrical. In comparison to batteries – multi-million cycles of charge-discharge is possible.

Some things to note for a design engineer. The EDLC or Electric Double Layer Capacitors …

The Double Layer Capacitors developed by WIMA are storage capacitors with highest capacitance values in the Farad range.

GTO Capacitors – WIMA – They are among others suited to serve as batteries, can deliver considerably higher currents for a short time, however, and are maintenance free.

SuperCapacitors – WIMA – These EDLC supercap has one-tenth of energy, but delivers over 10 times of power due to ultra low ESR. In Comparison with a Battery. A Lifetime of over 500,000 cycles.

Xelled Supercapacitor – Vinatech – Hy-Cap is an energy storage device that stores instantly a  large volume of electric energy and supplies instantly or  continuously higher current, by the mechanism of  absorbing and de-absorbing electric charge.

Electric double-layer capacitors ELNA – The electric double-layer design does not have the solid dielectric that is used in the previous designs, nor does it have the chemical reactions such as are found in batteries during charging and discharging. Rather this design has the following characteristics:

RUBYCON – EDLC Supercaps – Electric double layer capacitor (EDLC) stores the electrode surface and the interface of the electro bath as a dielectric substance at the part called “electric double layer”
EDLC has feature that is not electrochemical reaction, whereby rapid electrical charge and discharge is possible and have longer lifecycle.