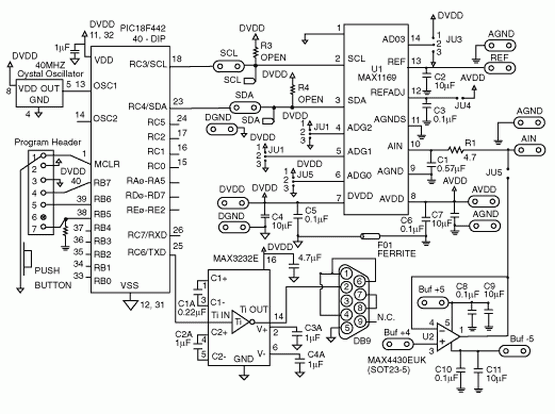 Interfacing the MAX1169 ADC to a PIC Microcontroller – Maxim

This
application note consists of an example application circuit and
software using the PIC18F442. The software contains function calls to
interface the MAX1169 to the PIC using the internal MSSP I²C port at
400kHz.

What
is the use of a Robot, which cannot perceive its environment in
detail. Where can a Control system be effective, if it does not get a
“feedback” about its actions. How could one do Analysis and Research or
Verify, when he cannot Measure a parameter with good accuracy and
resolution.

ADC are the Eyes and Ears for a uC, this
brings the Real world as Numbers within the CPU. Without ADC a uC is
like a Frog in the Well and has to create an Imaginary World for
himself. That is beyond the scope of Engineering.

Bring
your favorite PIC Microcontroller to his senses. Give him an ability
to Perceive the Reality around him. Get him an Analog to Digital
Converter and don’t forget to code.

An ADC must be
better than 4 1/2 Digit Value. For me the Intersil chip 7135 is a
Benchmark. Beyond 5 1/2 Resolution may be needed only for Scientific
Research.

The documents, software, tools and links are provided to enhance the ability of an electronics student, hobbyist or professional by sharing information. The information, links etc. should be used by the website visitor, at his or her own risk and responsibility. There may be concept, design and link errors in the pages.

Creative Work, ideas and documents of delabs can be used for Product Design and Development by R&D Engineers, Hobbyists, Students and even firms for creating useful products. These cannot be used for reprint, replication or publishing online or offline.