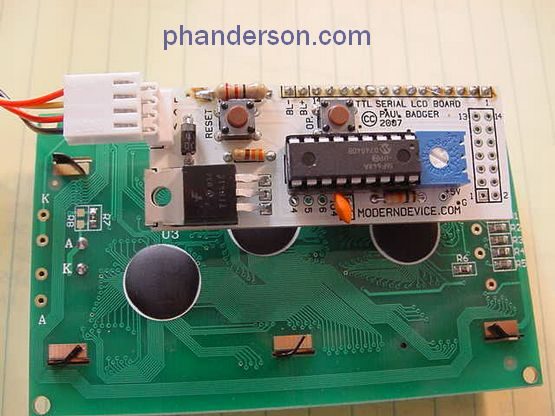 This is a combination of LCD PIC, an assembled printed circuit board from ModernDevice.com, a 20X4 LCD with Blue / White backlight and interfacing connector

This design provides an interface between a 9600 baud (or similar) serial line from a Microchip PIC, Arduino, Parallax Basic Stamp, NetMedia BX24, PICAXE and similar and a character LCD having an HD44780 interface.

The serial interface is TTL. That is, the idle state is a TTL logic one, or near +5 VDC. This is often termed non-inverting or true. This provides direct compatibility with the UART associated with a PIC, SerOut on a Basic Stamp and Com3 on a BX24. When interfacing with a PC or similar where the logic is inverted, an inverter is required. This might be as simple as a single 2N3904 NPN transistor.

(this is a very useful computer interfacing resource for instrumentation – delabs)

The documents, software, tools and links are provided to enhance the ability of an electronics student, hobbyist or professional by sharing information. The information, links etc. should be used by the website visitor, at his or her own risk and responsibility. There may be concept, design and link errors in the pages.

Creative Work, ideas and documents of delabs can be used for Product Design and Development by R&D Engineers, Hobbyists, Students and even firms for creating useful products. These cannot be used for reprint, replication or publishing online or offline.