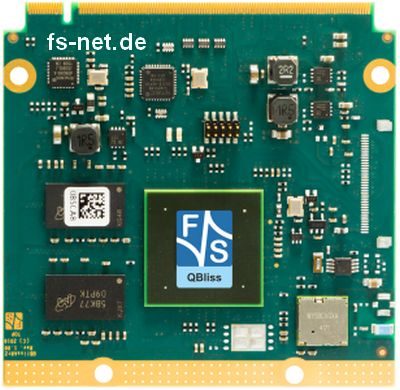 The Qseven concept is an off-the-shelf, multi vendor, Computer-On-Module that integrates all the core components of a common PC and is mounted onto an application specific carrier board. Qseven modules have a standardized form factor of 70mm x 70mm and have specified pinouts based on the high speed MXM system connector that has a standardized pinout regardless of the vendor.

These functions include, but are not limited to, graphics, sound, mass storage, network and multiple USB ports. A single ruggedized MXM connector provides the carrier board interface to carry all the I/O signals to and from the Qseven module. This MXM connector is a well known and proven high speed signal interface connector that is commonly used for high speed PCI Express graphics cards in notebooks.

Since the Qseven form factor was introduced; many manufacturers of boards and software have adopted it. The combination of Qseven and RISC gains more and more importance. The reason is the compatibility of the offered boards, as well as the small form factor (70x70mm) with an inexpensive plug connector