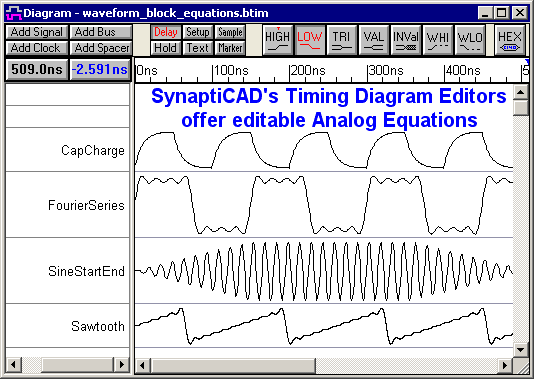 SynaptiCAD was founded by electrical engineers to create design tools that helped engineers think critically about their designs. With SynaptiCAD’s tools you are able to begin analyzing and simulating design ideas right away without having to complete an entire circuit model or schematic.

SynaptiCAD has released version 15 of its family of Timing Diagram Editors and test bench generators. The major enhancement in the new version is the ability to create blocks of editable analog waveforms using simple Python-based equations.

The tool also includes a number of built-in equations to create common analog patterns such as ramps, sine waves, and capacitive charge/discharge curves. The resulting waveforms can then be exported to many simulation environments including Verilog, VHDL, and SPICE simulators.