The MOSFET in Power Electronics 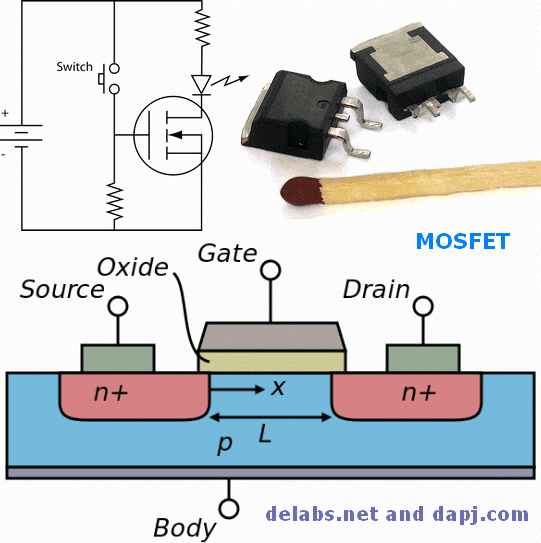 delabs Notes – In a Circuit Module, if all Power and Signal
Polarities are reversed. All NPN to PNP, All N-Channel to P-Channel and
Vice Versa. All Diodes and Caps too turned around. This Topsy Turvy or
Mirror Design ought to work in Theory. It has worked for some circuits
in practice too in my experience. ?

Some believe that
N-Channel is more Robust than the P Type. In Bipolar Transistor NPN is
more trusted for the final output stages. The NPN Transistor and
N-Channel turn-on by a Positive control bias. It may be inappropriate to
say this mosfet is NPN or PNP.

The
traditional metal–oxide–semiconductor (MOS) structure is obtained by
growing a layer of silicon dioxide (SiO2) on top of a silicon substrate
and depositing a layer of metal or polycrystalline silicon (the latter
is commonly used). As the silicon dioxide is a dielectric material, its
structure is equivalent to a planar capacitor, with one of the
electrodes replaced by a semiconductor.